I go away for a night and two days and come home to find I have a dead PC  or rather a system op corruption.  Thankfully I have all my data and installation discs backed up and kept safe.  Mind you it has taken since Sunday 8th to Wednesday 11th to get the system back up to speed.  Thankfully the system was the one in my living-room and I could always get distracted by watching the birds that visit my simple garden.  Truth be told I think that may be the reason why it took so long to get the system back up.  I sat watching a small Coal Tit (Parus ater) as it made a meal of a sunflower seed.  Later in the afternoon I watched to Starling (Sturnus vulgaris) as they had an after meal bathe. 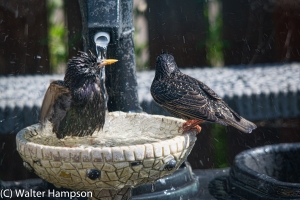 My partner Susan is into Am-Drama in a big way. She is involved in committees, costuming, organising for the Scottish Community Drama Association (SCDA). I am slowly getting sucked into supporting the SCDA, but not without a fight – rear guard action it may be but it is still a fight. As we were going away for two days  I turned off all my computers on Friday morning and we set off for Killin for the two day “Killin Komedy Festival”.  It was a greyish day as we set out – but brightened up as we headed north to the Highlands.  We did not stop at our usual break point at the first car park at Loch Lubnaig due to the legendary mirror stillness of the loch waters being disturbed by a wind shift.  Instead we stopped at the next rest spot which by happenstance had a take-away cafe.

We arrived at Killin at 2:45 just in time to book into our room and go for a stroll up to the old bridge which crosses the River Dochart and the Falls of Dochart. Usually the falls funnel a large surge of water through the two arches of the old bridge. At these times not only can you hear the roar of the water and feels the force of it as it thunders beneath the arches of the single track bridge.  We discovered that our visit coincided with one of these rare occasions when the river flow was abated and the underlying rocks, boulders which cause the river waters to froth, tumble and roar were uncovered and one could walk out to the main channel leading to the first arch. 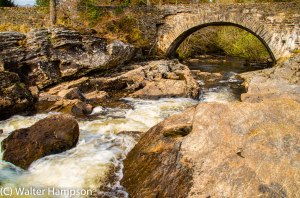 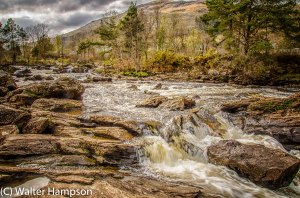 Even with this reduced water flow the river still roared its merry way to Loch Tay.

Early morning visitor to the “Chez Walter” facilities was the little Coal Tit (Parus ater).  It took the opportunity of a quite garden to indulge in breakfast of Sunflower seeds and the luxury of a cold water bath. 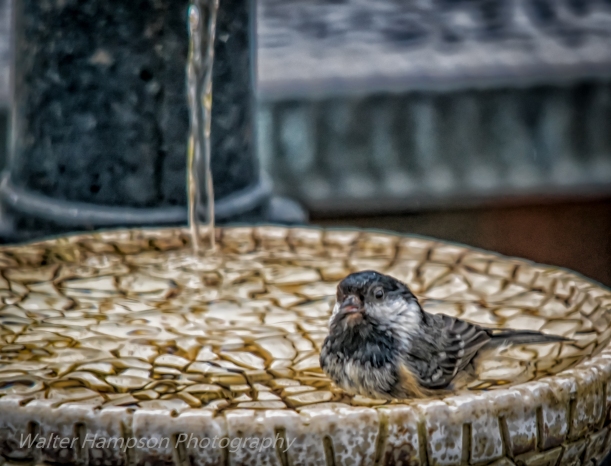 Busy day today doing other tasks – still managed to keep one eye on “Chez Walter” feeders.  Very early visit by Coal Tit (Parus ater), to early for me and too quick for me to grab my camera and get a shot of him/her. These little birds are very quick, quick to land on the feeder, quick to get a sunflower seed and quicker to scapper with the seed to a place where they can eat it in safety.

The regulars were in force today, 4 Woodpigeon (Columba palumbus), several squawking  Starling (Sturnus vulgaris) fighting over the small fat pellets and the stately pair of Collared Dove (Streptopelia decaocto).  The feeders or rather the water feature, a pump, was graced by the visit of an old friend, Robin (Erithacus rebecla). 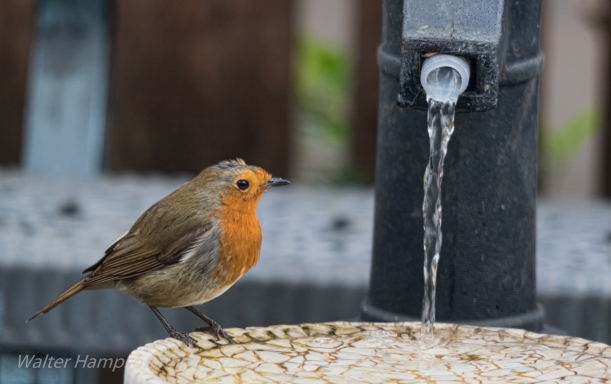 May – the green month, the month trees show the new green leaves, grass appears to been repainted with a bright green and skies go blue with fluffy white clouds.  The reality is the exact opposite, high wind, rain and cold. No new bird visitors have been seen over the last 3 days. I did have a very fleeting glimpse of a Siskin (Carduelis carduelis) on Saturday however, it was a very brief stop at one of the feeders then flew off, not enough time to get a photo of it.  The stalwarts pay frequent visits and an increase the sparrows or to give correct name House Sparrow (Passer domesticus).  The Dunnock pair are very frequent visitors at present, though I think it will only be one visiting soon as they hatch their eggs.  One favourite visitor is the Collared Dove (Streptopelia decaocto).  I do like this bird.  The visitors appear to be a pair – with one of them having a feather coming out of the wing.    I’ve been using three cameras over the past week Canon 50D, Canon 60D and a compact zoom Canon SX50 HS.  This image of the Collared Dove with the loose feather was taken with the Canon SX50  HS.

I’ve used that expression myself without really thinking about the phrase.  It is generally a mildly insulting phrase denotes silly behaviour, actions or thoughts usually attributed to a child or immature person.  Yet birds are not silly, in fact their brains control flight and are really ideal for the bird, perhaps not for a human. Do birds have silly behaviour? I cannot say what thoughts they have. What I do know from my own observations is that they are quite smart, especially the Crow family.  I sit at my computer overlooking my small garden which I call “Chez Walter”  Since 2012 I’ve watched Starling work out how to get into feeders which have access for small birds only.  Today I sat and watched a Collared Dove (Streptopelia decaocto), work out how to land into a suspended table type feeder (shown left).    The Collared Dove is about the size of a small pigeon: 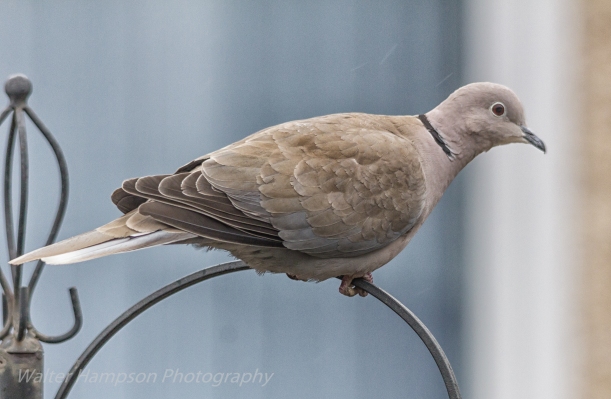 The bird assessed the situation, there was seed in in the feeder which was suspended from a hook on a stance.  One side was blocked by the stance pole leaving three sides with limited flight path to a tight opening.    A quick flick of the wings a short flight and a hop and the bird was inside the feeder – perhaps not fully, but enough to get the seed.  Mr or Mrs Collared Dove enjoyed the rewards of his/her efforts.  Next time I looked up there were two doves inside the feeder – alas I did not manage to get a shot of them….next time I’ll have the camera ready

The other day I watched a Magpie (Pica pica) take some dried meal worms drop then into a small birdbath of water fly away.  She came back approx 3 minutes collected some more dried mail worms drop them into another part of  the birdbath then collected her previous load.