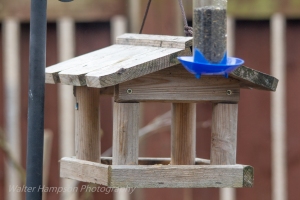 I’ve used that expression myself without really thinking about the phrase.  It is generally a mildly insulting phrase denotes silly behaviour, actions or thoughts usually attributed to a child or immature person.  Yet birds are not silly, in fact their brains control flight and are really ideal for the bird, perhaps not for a human. Do birds have silly behaviour? I cannot say what thoughts they have. What I do know from my own observations is that they are quite smart, especially the Crow family.  I sit at my computer overlooking my small garden which I call “Chez Walter”  Since 2012 I’ve watched Starling work out how to get into feeders which have access for small birds only.  Today I sat and watched a Collared Dove (Streptopelia decaocto), work out how to land into a suspended table type feeder (shown left).    The Collared Dove is about the size of a small pigeon:

The bird assessed the situation, there was seed in in the feeder which was suspended from a hook on a stance.  One side was blocked by the stance pole leaving three sides with limited flight path to a tight opening.    A quick flick of the wings a short flight and a hop and the bird was inside the feeder – perhaps not fully, but enough to get the seed.  Mr or Mrs Collared Dove enjoyed the rewards of his/her efforts.  Next time I looked up there were two doves inside the feeder – alas I did not manage to get a shot of them….next time I’ll have the camera ready 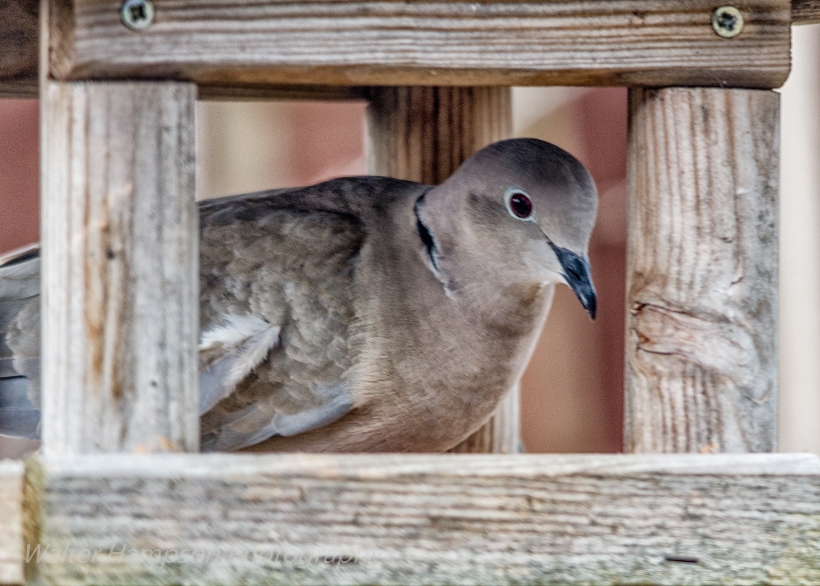 The other day I watched a Magpie (Pica pica) take some dried meal worms drop then into a small birdbath of water fly away.  She came back approx 3 minutes collected some more dried mail worms drop them into another part of  the birdbath then collected her previous load.