2005 was a sad year for Susan as her mum had passed away on 25th July.  I Had not been aware of that fact until she returned to work.  During one of our lunch break walks we had touched upon taking a trip together a day out so to speak.  Quite how we decided upon a trip on The Jacobite I am not certain.  Susan had taken her grandkids to see Chamber of Secrets (Harry Potter 2) and the segment with crossing Glenfinnan Viaduct had stirred a desire to cross by train.  We agreed to to take a chance and head up to Fort William and see if we could get a ticket.  Our first on many adventures together was on.

It is said (but not by whom) that everyone experiences a “Perfect Day” once in their life.. Sunday the 31st July 2005 was such a day.  We set off from Livingston at 6:00 am it was a clear day with nary a cloud in the sky.  It takes 3 hours + to get to Fort William allowing for photo stops on the way.  Susan was in good spirits as we set off heading for what would be our usual route to Glencoe.  We stopped at the Loch Tulloch Viewpoint – surprisingly clear of tourists.  I was struck with the cloud formation above the Black Mount as it gave the impression (to me at least) a simmering volcano.  At 8:30 the morning was

already warm and the day held a lot of promise.  As this was our first trip together, on what would become a regular outing (Glencoe), I did not stop at the layby near Buachaille Etive Mòr as I was not aware of the significance of her to Susan at that time.  However, Susan did get one on the way back. We arrived in plenty of time to be first in line for a ticket (not guaranteed – we learnt from that to always book ahead.)  We were in high spirits, like excited school kids on their first outing.  Looking back, and I may be seeing through rose tinted glasses (makes a change from looking through ones with smears), we were relaxed in each other’s company.  Susan was smiling a lot as she pointed out Ben Nevis and relating her climb with Bob up the mountain.  I was twittering about the history of the line.   At 09:50 we were offered two tickets (Return) and boarded “The Jacobite” for our adventure through the mountains, along the lochs, gullies. cuttings heading to Mallaig behind a living breathing dragon.. oops sorry got carried away with a memory there.

We did a there and back again trip.  Have enjoyed ourselves  exploring Mallaig ie finding an eating place , walking along the harbour and general chit-chat we found we had many things in common as well as many differences, somehow there must have been residual magic from the HP film as we planned our next adventure together. 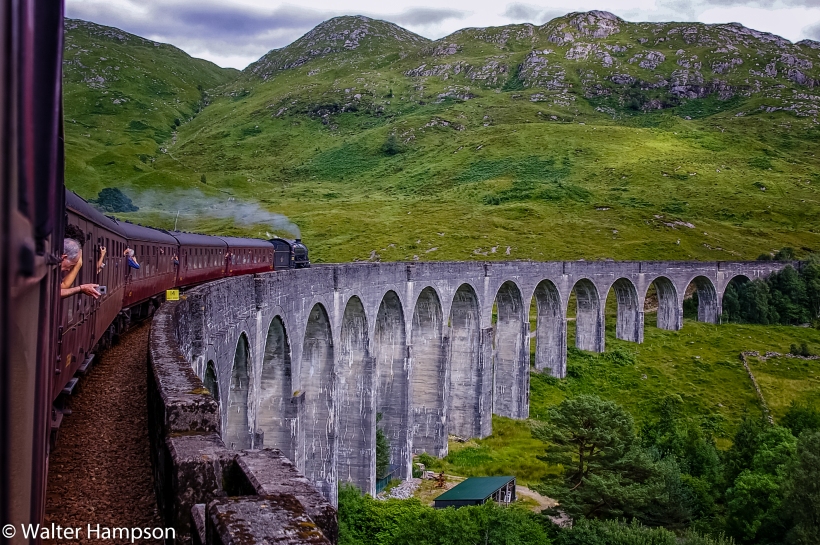 My final photo of that trip shows a Susan deep in thought with her reflection on the carriage window.  I would take many pictures of Susan on our adventures and with the Intrepids but this remains special  as I said everyone has at least one perfect day mine went on for 14 years. 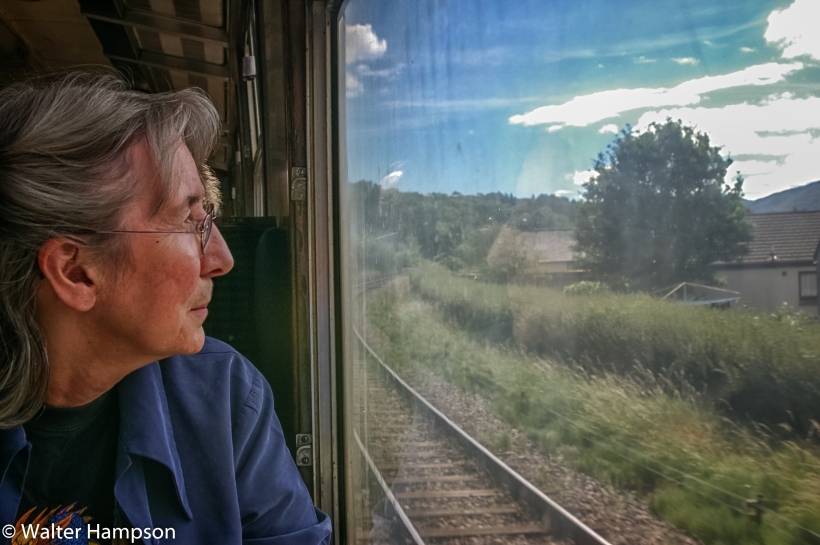