On 30th May 2020 we welcomed back Hornby R053 LNER B17  Manchester United and Hornby R1019 LNER A1 Flying Scotsman after Horns & Whistles Workshops  completed the conversion on both locos from DC to DCC.

The conversions went well and I must admit I thought problems would be encountered converting the B17 as Hornby released it in 1980  and ceased in 1982, making the model at most 40 years old.  Models at that time were not as scaled or detailed and had outsize wheel gauge to fit on the older Triang/Hornby system 4 and not the latest scaled tracks produced by Peco and Hornby.

The video of the test run on Ennitoun’s modern tracks confirmed my faint suspicions but by no means caused me to be disheartened as the problem is not unsolvable.  The stutter as she crossed the points is not the fault of the conversion done by Horns & Whistles Workshops.  The cause is the outsize wheel rim bridges the iso-frog and causes a small short as the wheel hits both metal parts of the frog (the V formed where the inner rails meet in the point).  This will be rectified when the layout undergoes its expansion to have a loop (tail-chaser) added.  In fact for a 40 year old model she ws in very good condition and on the straights proved to be a fast runner.

The A1 Flying Scotsman was part of a  Train set released in 1999 – 2002 so I did not expect any problems with the running of this model and pleased my  faith was well founded.

Further Locomotives will be sent for DCC conversion (with sound where possible) until all stock has been upgraded and available for traffic duties.  Those that are not up-gradable/convertible will be gracefully retired to the “Ennitoun Railway Museum). 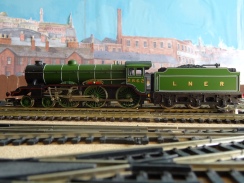