For some time there has been speculation that the Thinnish (as then) now Slightly Stoutish Controller (after  8 weeks Lock-down) had been contemplating introducing some new form of modern train, not ultra modern,  but a train not an engine.  Whilst updating the Ennitoun stock album (https://flic.kr/s/aHsmNrqRK3) it was discovered that a BR Class 110 Diesel Multiple Unit (DMU) was on the books.  It had been declared as NON-DCC and was destined to be consigned to the Ennitoun Railway Museum.  At first the controller was happy with that decision, however, as time wore on and the DCC enable locomotives were enjoying a new lease of life it became more apparent that exploratory measures had to be undertaken to check the viability of having the DMU upgraded to run on DCC.

The conversion project was forwarded to Mark Gawthrop at Horns & Whistles Model Railway Workshop.   The consensus reached it was viable and at a reasonable expenditure.  The go-ahead was given and the DMU power car was dispatched to Marks workshop.   A video showing the results of the conversion was shown to the Stoutish Controller. The converted  unit was re-united with the remaining two cars of the set and given a test run on Ennitoun System.  This test run ended the speculation regarding a nearly modern DMU being incorporated into the running vehicles of the SW & WH “Ennitoun MR”.  The slight stutter at the points was due to fact that the DMU was running at a very slow speed and causing a short on the points.  The setting as “2”.  On the return run  and subsequent tests it was ran at normal speed of 3 – 4 with no stutter or hesitation.

In light of the successful conversion an agreement was reached that Horns & Whistles Model Railway Workshop be tasked to undertake conversion of:

Hornby R053 LNER B17  Manchester United and Hornby R1019 LNER A1 Flying Scotsman – currently in their workshops. Latest news is that B17 has been converted but alas no sound as no space for speaker.  A1 is currently undergoing upgrade with (hopefully) TTS Sound.

Further Loco motives will be sent for DCC conversion (with sound where possible) until all stock has been upgraded and avaiable for traffic duties.  Those that are not up-gradable/convertible will be gracefully retired to the “Ennitoun Railway Museum).

How and when did I get the railroad bug?

My earliest memory of toy trains is way back to Christmas 1955 when the family lived in the Townhead Glasgow.  Not just my mum and dad but the extend family of my Dad’s brother’s and sisters lived in Parson Street.    I was surrounded by cousins as well as a little sister – but they di not figure much in the tale of origins.  I got a clockwork train set that Christmas sadly it did not survive the day.  My dad and his brothers spend the time playing with it and my Uncle Peter wound it up too tight and bust the clockwork.  I never got a chance to play with it.  Dad, as dad’s do said we’ll get it fixed – it never was.   The following year I pointedly asked not to have a train set just cowboy outfit (all the rage in ’56).

That does not mean I was not interested in trains – we lived near St Rollox works and steam depot and a walk along the canal we could see the smoke raising from the engines and hear the rumble of coal falling down the coaling tower with a crash into the bunkers/tenders of the engines.  He would take me to see the trains at Buchanan Street, Queen Street, St Enoch’s and Glasgow Central.   Christmas time was my favourite as I got to see the train set/layout in Central Station. It was not until we moved to Harmony Row, Govan ’57 when I got my next train set.  In fact it was due to my reaction at Christmas ,56 I ended up with a trains set in ’57.  Now My mum and dad were just working folk, but they did without at Christmas to ensure my sister and I had a good Christmas with one very special toy each, plus sweets etc.  That Christmas my special gift was a complete airport.  I mean the lot, runway, tower, planes fuelling trucks.  I still recall the amazement when i saw it all.  But it got boring after a while.  Apparently (so I was often reminded) I gathered the boxes and set them up as an engine and played at “Casey Jones” (Alan Hale was on TV as “Casey Jones”).  Christmas ’57 I got my first ever electric train set a Triang TT gauge goods train on a circle of rails pinned to a board.  I recall that wee loco (a 0-6-0 ex LMS Jinty) with great fondness and therein lies the start of a journey which would end in Ennitoun.

Today I have the larger OO Gauge version of the embryonic model locomotive the set out in 1957 taking me on a journey  of life. Click on Image for Ennitoun Locomotive Library 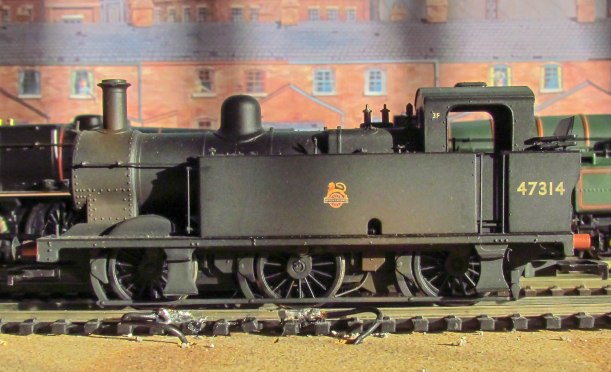 The operation of the trains required further thought and careful consideration.  Planning consultation was put in place by the Thinnish Controller – and three plans were presented for consideration: 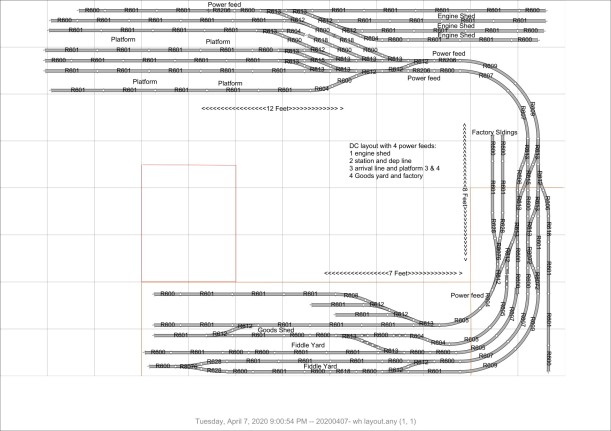 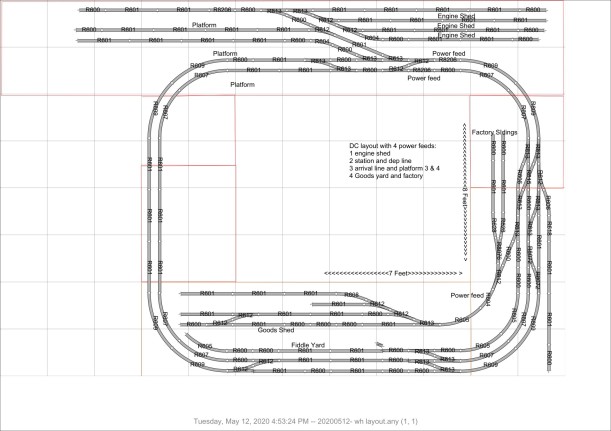 This proposal put in a 2 line loop (known as a “tail chaser layout” as the loco tries to catch up with its train.  This had the impact of removing 4 lines from the station and introduced the problem of returning a train to the station. 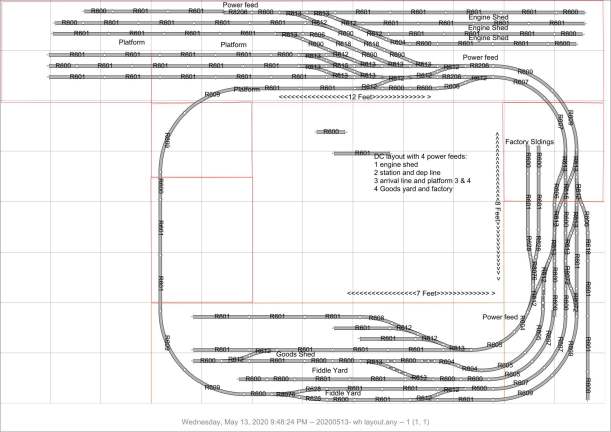 This proposal suggested that the two bottom lines be merged into one line to make the loop.  This was considered very carefully as a station could be sited at bottom loop and permit an addition operation to  replace outgoing engine with incoming.  This was fast the favourite – but a flaw was pointed out <sigh>. Freight traffic was still a diorama instead of an integral working on the system.  Nothing for it but to go back to the drawing board.

The third proposal came from an unpaid consultant

Richard Standing –  An alternative would be rather than taking the loop off the passenger sidings in the fiddle yard, take it off the goods yard instead. That way it could be assumed to go to a coal mine or other mineral extraction plant in one direction, and a harbour (or power station or gas works) in the other, or a forest in one direction and a saw mill in the other, with loaded wagons going one way, and empties coming back.

This was given great deal of thought and the proposal generated the 3rd revision of the planned amendment to the layout. 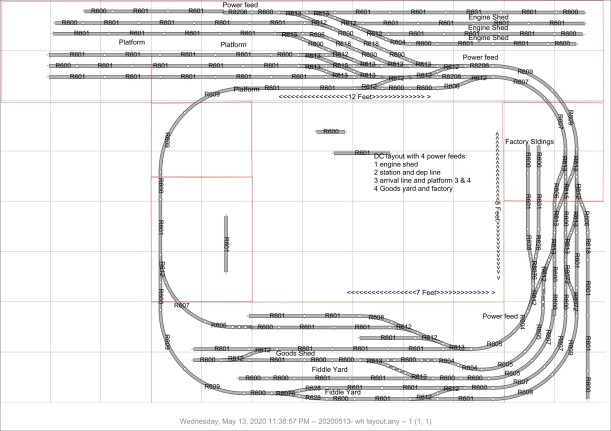 This plan met the immediate approval of the Thinnish Controller and was approved by the senior person in charge (Felix or was it Mr Loki?).  Alas owing to current restrictions and the lack of materials work cannot commence immediately. Only a third of the platform at the station would be lost> The additional fright loop would introduce more movement and traffic allowing for a variety of trains, freight.  Word has gone out that there is talk of modernisation plans and the introduction of Diesel Multiple Units (DMU).  Staff are now concerned that ith this change more dieselisation will be taking place.  AL have been informed that no intention to remove steam from this layout.

The upgrading of locomotives continues – with approval given to upgrade 16 out of the 21  non-DCC locos being converted to DCC.  the 23 DCC ready locos are awaiting their sound chips to arrive.

On 3rd May the DCC stock stood at 11 DCC fitted models on the layout, four have sound fitted:

Yesterday 4th May “The Forth” was with me and a largish parcels containing three locomotives finally arrived. 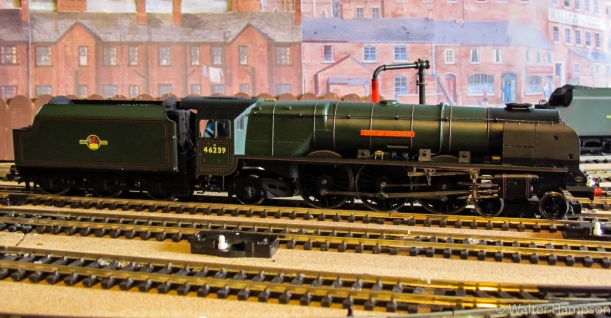 The third was a new purchase, Hornby R3195 46247 City of Liverpool  Renumbered and renamed as 46242 City of Glasgow. (now I’ll have to buy the “City of Liverpool and add to my collection (of course it will have the works done to it) 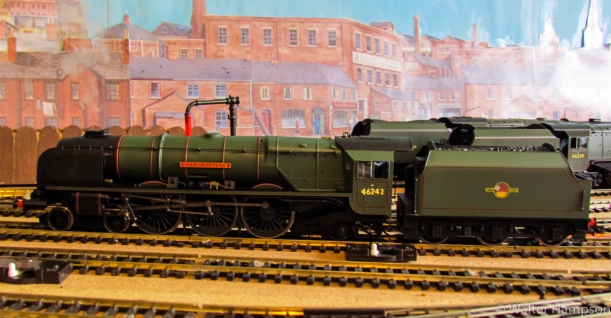 Duchess Coronation a renamed/renumbered R3159 46247 City of Liverpool to 46242 City of Glasgow which replaced my old Hornby-Dublo model.

Each of these models were upgraded with following features:

by Olivia,s Trains , Sheffield.  Neil (proprietor) has been very helpful to this newbie entering DCC world with strange language of its own.  My first contact was the purchase of a DCC fitted LMS 6242 City of Glasgow (Hornby R2311)  with sound to go with my recently purchased Hornby R3509TTS 46235 City of Birmingham.  While sound was the driving factor Neil asked if I had considered adding smoke. I recalled that Hornby had released some models with smoke units (no sound though) and they did add a little more to the ambience of operating steam outlined locomotives.  My rational was its “The City of Glasgow” – your favourite engine – give it the works” so I did and Olivia’s Trains did. To my utter delight.  Thanks Neil, Erika and team I can fully recommend your five star service.

The City of Glasgow – with Sound, Smoke and screeching brakes. 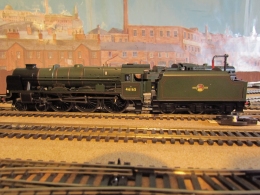