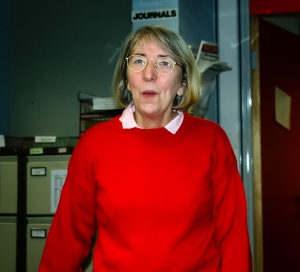 I first met Susan Wales near the start of my Civilian life.  Like all I had a childhood, then reality dawned and childhood ended I began to earn a living, still at home.  I started as a delivery lad for local co-op. then got a Job as messenger at British Rail Hope Street office, thence Signalbox lad at Glasgow Central Signal Box, Trainee Signalman, Porter at Williamswood, finally Passenger Guard (I had just turned 18) at Central Station.  I stayed with British Rail for 3 years then enlisted in the Royal Air Force at the age of 21.  I re-entered civilian life in 1993 and had 3 jobs before I was became temporary maternity cover for Assistant Licensing Officer at West Lothian Council in 1997.  It was there I first met Susan. We chatted as work colleagues do.  She was at that time married to Bob Wales.  Susan was a Legal Assistant, tasked with processing traffic orders and looking after the legal library.   If I recall correctly Bob passed away in December 2003.  Susan then persuaded her mom, Mabel, to move from Manchester and live with her.  During this interlude Susan and I would chat as colleagues and meet at lunch

with other friends and colleagues.

Among my many interests was photography, but I was never happy with film.  I could see the picture but no matter what I did it never transcribed to film.  I was always disappointed with the commercial processing, but I had learnt a painful lesson whilst serving at RAF Gan,  photographic chemicals and I do not mix.  Alas my interest waned and eventually died away. 1982 whilst stationed at RAF Stanbridge I became interested in the new fangled toy of the year the personal computer, a love affair which lasts to this day.  Two changes occured in 2005. The first was a spur of the moment purchase of a digital camera a Nikon E2000.  I still have it. My love of photography was re-ignited.  Combined with computer software I could at last get the images I saw and print them myself.  My favourite make of SLR was Pentax so I purchased a Pentax *isDS Digital Single Lens Reflex and began the learning curve of shooting in digital raw and “Developing” on digital software to create my final image.  My first ever digital image was taken on 2nd January 2005 at 15:04:24 at Bannockburn.  The bug had bitten, infected the blood and the brain was seduced…I have discovered digital photography which combined with computer software gave me control over my image processing.

Susan on her last visit to Buachaille Etive Mòr

In fact it was photography that really brought Susan and I together.  When I left the RAF I lived with my mother, I had been given a compassionate posting after the death of my father owing to the fcat my mother was elderly and disabled.  This in effect killed any further promotion through the ranks.  As I stated earlier I retired from the RAF in 1993 after 22 years service with the Rank of Corporal.  Hey  I got a pension so I was happy. During the spring – Autumn I would walk to work and had camera with me.  I would stop and photograph flowers, birds trees etc. I was getting used to my camera.  Susan was already an avid photographer with her own Pentax SLR.  She, Bob and one of Bob’s workmates would go up to Glencoe and climb/hill walk – her love of one mountain stemmed from those days – her beloved Buachaille Etive Mòr.

Little did I realise or indeed did Susan, our lunchtime walks and chats were drawing us into a relationship.  Our first adventure was just around the corner or was on track so to speak.